The downgrade is just another signal that big time inflation is coming.  The U.S. Treasury borrows money by issuing bonds.  Because it has a massive spending problem and can't live within its means it runs a perpetual and ever expanding deficit.  The deficit is financed by issuing more bonds.  This process is currently going parabolic as the U.S. debt load is expanding at an alarming rate.  See the chart below. 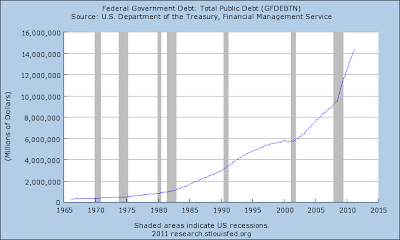 The U.S. stopped minting quarters and dimes out of silver in 1964 and it removed the gold backing of its dollars in 1971.  There is now nothing backing the dollar.  It is pure paper as is every other currency in the world.

By purchasing the bonds, the Fed enables big government spending to expand unchecked.  Without the Fed buying bonds, interest rates would rise and it would be a natural check on the ability of congress to spend money it doesn't have.  The additional interest expenses caused by the higher rates would prevent the government from spending borrowed money recklessly.  Enter the Federal Reserve buying the bonds with no check on their dollar creation from being backed by gold and silver and you have the crisis that we are living though today.

The debt ceiling fiasco was a predictable show where the Democrats and Republicans pretend to be opposing political parties battling it out.  In reality, they are both big government statists more than happy with the status quo.  The real battle is between the big government types and the small government constitutionalists led by Ron Paul.

The ability for the U.S. government to finance it's spending profligacy will not be affected by the debt downgrade.  In a free market, rates would already have been much higher than they currently are and would have jumped even more on the news.  In this Fed controlled environment rates may rise in the short term but it is all noise,  The bottom line is the Fed can and will continue to purchase the bonds.  As long as this continues the U.S. runs no risk of outright default.  The dollars borrowed from previous bond issues will be paid back.   All that needs to happen is new debt issues and a willing Federal Reserve to buy them with the magic of money creation.

The trade off for this money creation will be massive inflation and a crashing dollar.  This downgrade, combined with the congress increasing the debt ceiling with provide cover for the Federal Reserve to begin QE3.  They may not call it that, but it will happen.

An additional easily predictable result of the downgrade will be for a call for the U.S. government to increase it's tax revenues.  Look for tax hikes, and sooner than we think.

So what does the debt downgrade mean?  In the short term volatility and a call for higher taxes.  In the long term it is just another nail in the dollars coffin and another step on the road to much higher prices for everything.  As the talking heads in main stream media look for a cause of this crisis, it is important to remember the culprit is of course the Federal Reserve.
Posted by Free Market Economics Fan