Big time trouble dead ahead thanks to the Federal Reserve.

The paper money dollar experiment of the last 40 years has reached an unsolvable impasse. Since 1971, when Nixon defaulted on the dollars convertibility into gold there has been no restraint whatsoever on the Federal Reserve's ability to finance the U.S. government's boondoggle spending programs both foreign and domestic.

The government doesn't have to rely on tax receipts any more. It simply issues bonds to borrow the money. The Federal Reserve ensures those bonds are always bought, buying them itself if necessary as it has done with QE1 and QE2. Here is a chart of the national debt since the dollar was taken off the gold standard. 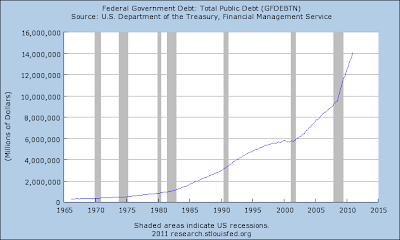 That is the macro 40 year picture. During that time there have been recessions. These have been a direct result of the Fed policy of lowering of the interest rates below their natural free market rate during market downturns. Austrian business cycle theory explains this predictable boom bust cycle:  For more see here:

The cycle repeats in progressive cycles with each bust getting progressively worse. Debt loads constantly increase and the malinvestments, never having a chance to liquidate, continuously drag on the economy more and more until we reach the dreaded point of no return.

At some point the low interest rate policy of the Federal Reserve fails to kick start the boom bust cycle. The debt burden is just too large to overcome. We are at this point now.

Below is a graph of the Fed funds rate for the last 10 years. You can see the Fed furiously lowered rates after the nasdaq dot com crash. Instead of a much needed recession to realign resources with profitable investments, the Fed prevented the recession from liquidating the malinvestments. The artificially low rates instead ignited the housing bubble and its related derivative securitization bubbles. The bubble popped in 2008. 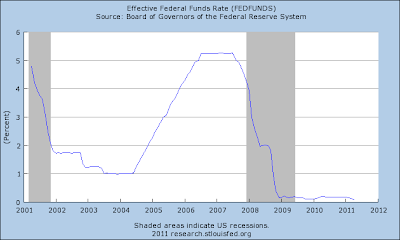 Predictably the Fed again lowered rates. This time it has taken them all the way to zero. The difference now is that this time it is not working. The Fed cannot ignite another bubble. The burden of the massive debt overhang is too much to overcome. There will be massive defaults at all levels of society including individuals, corporations, municipalities, states and finally the Federal government itself. They all have too much debt to pay back and it will be defaulted on.

There are two ways they can default.

They can default by not paying the loans back and we get a vicious but not endless period of deflationary debt collapse where all the bad decisions of the past Fed induced business cycles are finally accounted for.

Alternatively, the U.S. Government can bail out everyone by borrowing tens of trillions more and turn to the Federal Reserve to magically print up the necessary dollars to finance it all. This would eviscerate the dollar on the foreign exchange market and send prices soaring to the moon in a hyperinflationary depression.

There is no solution to the crisis, merely a choice of which of two roads to choose, a deflationary debt collapse, or a hyperinflationary dollar collapse. Pick your poison thanks to our masters at the Federal Reserve.

One thing is certain, when the dust clears we need to point our fingers at the Fed as the real culprits enabling a welfare, warfare state where the majority of the populace is on the dole. Free market capitalism will allow us to return to prosperity after the crash if we let it.

We need to listen to those who saw what was happening and warned about it. There are free market economists who understand the need for a sound commodity based money and can help ensure the special interest groups never again take control of our economy and our country.

One such man is Congressman Ron Paul of Texas. He first ran for congress shortly after Nixon took us off the gold standard all those years ago when he saw the writing on the wall for our current day crisis. Dr. Paul is running for president and is the only one running who understands our current crisis and what to do about it to return us on the road to prosperity.