A tale of two quarters. 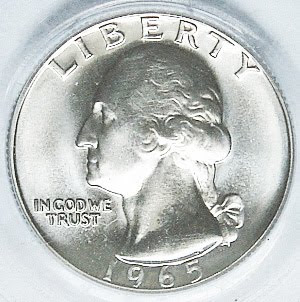 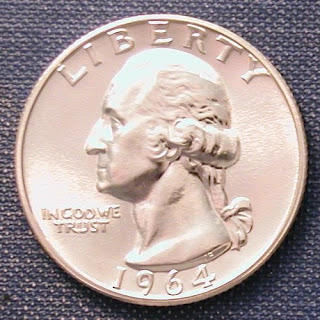 The quarter on the left is worth $4.15 based on Friday's closing price of silver. The one on the right is worth, you guessed it, 25 cents.

Shortly after the U.S. government removed the silver from its coins, it also removed the gold backing from its dollars (1971). Since then there has been no constraint at all on the growth of government.

Beholden to special interest groups, politicians routinely spend more money than they collect and they simply borrow the difference by issuing bonds. The Federal Reserve makes sure all the bonds the U.S. government wishes to sell are successfully auctioned off. If necessary the Fed will buy them itself with dollars it creates out of nothing. This increases the money supply, dilutes the value of the dollar and causes price to rise. What we are left with is a mountain of debt that must be paid back with interest. The following chart is from the Federal Reserve website and shows the growth of U.S. Treasury debt since the government abandoned gold and silver money. 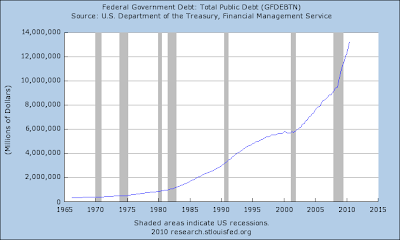 This growth in government debt has financed the massive expansion in the scope and size of the government. It simply would be impossible to consistently spend beyond its means with a gold or silver standard. The metal would leave the vaults and go to settle payment to our creditors. When the metal runs out, the spending would cease.

The above graph does not include the tens of trillions of dollars in unfunded social security and Medicare obligations. The debt is unpayable and will be defaulted on. It can be literally defaulted on such as the Russian bond default of 1998, or it can be defaulted on by paying the nominal dollars back with more and more newly created and progressively less valuable money. Either way the purchasing power of the bondholders will be crushed.

This process of devaluation has been going on relentlessly since the U.S. abandoned the silver and gold standards. The money supply increases, necessitating more dollars and higher prices to equal the same amount of purchasing power. We see it with all commodities from corn to crude oil.

The 1964 quarter is still the same. It is the dollar that has changed. With the price of silver more than 16 times as high as when the coin was minted it means that in addition to all the onerous income, sales, and other taxes, we have also suffered a massive stealth inflation tax.

There is no free lunch. Spending programs must be paid for one way or another. If it isn’t paid for with taxes it is paid for with a devalued currency. This is to say nothing of the capital gains taxes on any “profits” earned due to inflation driving up nominal prices. If the money supply doubled immediately and equally across the entire economy all prices would double. Those stock prices that doubled would be subject to capital gains taxes, when in actuality their relative value is unchanged.

We have to understand the value of a sound currency. It allows people to save money without having to speculate. It restrains the growth of government. It prevents the theft of purchasing power that occurs with a devalued currency.

As Henry Hazlitt put it in his classic Economics in One Lesson:

Like every other tax, inflation acts to determine the individual and business
policies we are all forced to follow. It discourages all prudence and thrift. It encourages squandering, gambling, reckless waste of all kinds. It often makes it more profitable to speculate than to produce. It tears apart the whole fabric of stable economic relationships. Its inexcusable injustices drive men toward desperate remedies. It plants the seeds of fascism and communism. It leads men to demand totalitarian controls. It ends invariably in bitter disillusion and collapse.
Posted by Free Market Economics Fan