In Governments cannot create jobs Part 1 it was shown how governments do not and can not create the capital necessary to provide jobs. All the government can do is serve as a coercive transfer agent of wealth. It uses its position as monopoly tax collector to steal from Peter to pay Paul. In the example mentioned in Part 1, Peter is everyone who has to pay the 1% additional tax and Paul is the group of 2000 laborers who benefit by the building of the bridge. The net result is worse than a zero sum gain because the government siphons off some of the money for its own expenses in the process.

There are only three ways governments can raise money:
1) taxation
2) borrowing
3) printing money


The first of these methods, taxation, is also the least popular among politicians because there is the most backlash. It is obvious to the public that some are made worse off in the process. For that reason governments prefer the latter two methods, which hide the costs from the unsuspecting public.

This weeks post will deal with government borrowing and spending in the various stimulus packages from 2008 to present showing their futility in improving the economy.

Now the real world example of flawed economic policy and its dire consequences:

From Wikepedia
The American Recovery and Reinvestment Act of 2009, commonly referred to as the Stimulus or The Recovery Act, is an economic stimulus package enacted in February 2009. The Act followed other economic recovery legislation passed in the final year of the Bush presidency including the Economic Stimulus Act of 2008 and the Emergency Economic Stabilization Act of 2008 which created the Troubled Assets Relief Program (TARP).
The stimulus was intended to create jobs and promote investment and consumer spending during the recession. The rationale for the stimulus comes out of the Keynesian economic tradition that argues that government spending should be used to cover the output gap created by the drop in consumer spending during a recession.


The first chart shown below is taken from the Federal Reserves website and shows the U.S. Government debt for the period when these massive stimulus packages began until the end of the first quarter 2010 (the latest data available to be graphed) 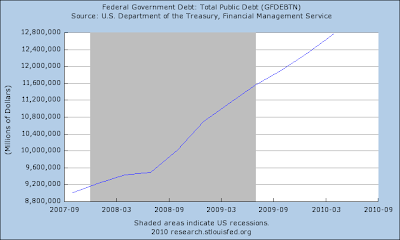 As can be seen, the national debt has skyrocketed by trillions of dollars. Let's take a look at the results in the unemployment graph shown below for the same time period. 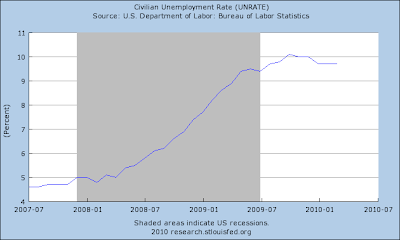 The graphs speak for themselves. It is clear that the trillions of dollars of stimulus have done nothing to improve the employment picture as the unemployment rate has climbed from 5% to 9.5%. All that we have to show for ourselves is trillions more in debt. The Keynesian big government approach to dealing with recessions is clearly fatally flawed.

A free market approach would be to understand that the government can only make things worse. Malinvestments must be purged from the system. Companies that made bad bets must be allowed to fail. Companies that lose money must be allowed to go bankrupt. The capital and resources that were poorly managed must be freed up so that entrepreneurs who have the wherewithal to manage them profitably can create the goods and services that will result in a robust self sustaining economy.

Next week in Part 3, I will go over the third method of government uses to finance their operations, printing money.