Business cycles are caused by the Federal Reserve 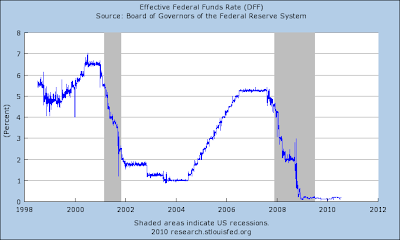 The business cycle under the Federal Reserve:
1) The Fed lowers interest rates below what they would be on a free market.
2) Businesses borrow money for long term projects that previously hadn’t seemed profitable.
3) People and money flow into the sectors most influenced by the apparent boom.
4) The Fed begins a process of incrementally increasing interest rates at regular intervals.
5) Prices rise, often ending in a mania phase (examples: dot-com bubble, housing bubble)
6) A realization occurs that there is not sufficient actual savings to make all the projects
profitable in those sectors affected by the boom.
7) Prices fall, unemployment rises, as the market tries to reallocate resources in ways that matches workers and capital into more useful projects.
8) The Fed again lowers interest rates below what they would be on a free market.
9) Money losing businesses are kept alive by borrowing to finance their day-to-day expenses. They hope for a return to higher prices in an attempt to unload inventory and return to profitability.
10) Resources and workers are encouraged to remain in the unprofitable post boom industries.
11) Servicing large debt loads becomes widespread.
12) New long-term business projects are evaluated based on the artificially low rates.
13) Return to #2 above and repeat the cycle, now with larger debts loads. This will continue with each successive cycle getting worse until either the debts default en masse in a deflationary depression or the currency collapses in a crack up boom hyperinflationary depression.

A Free market scenario alternative is possible as the recession in #7 begins:

8) Malinvestments are cleared from the system as those who made bad bets lose money. Those who risked the most money on ill-fated projects go bankrupt.
9) The assets of bankrupt firms are sold based on bankruptcy laws. Viable businesses reopen under new management.
10) Wage rates normalize across industries based on market conditions. Workers realign themselves into healthy industries.
11) People make business decisions, especially those concerning long-term projects, based on the correct market interest rate.
12) When the amount of savings increases, interest rates fall. When the amount of savings decreases, interest rates rise.
13) The free market interest rate allows businesses to correctly judge the viability of long-term projects by matching up cheap money with situations where projects will be profitable upon completion. The savings exists to purchase the products